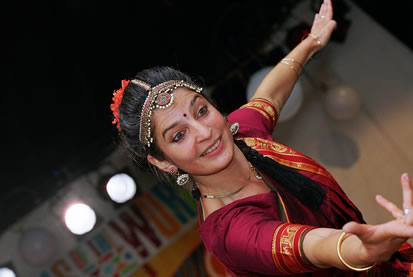 
Rhythms of the World (ROTW) was founded in 1992 by the Hitchin Oxfam Campaigns group to raise money for Oxfam and to highlight Oxfam campaign issues.  The world music concept reflected Oxfam's internationalism and linked well with the multi-cultural nature of Hitchin.

The first four years were staged in Hitchin Town Hall with admission by ticket.

First ROTW.  Five performances by local artists including the excellent African Drummers from Luton and Flaky Pastry.  Inexperienced organisation and poor PA was a problem at this debut.

Undaunted we booked the Bhundu Boys, found a proper sound man and ran a massively successful sell-out event that raised over £2,000 for Oxfam.

Another successful event with the Bhundu Boys back by popular demand.

King Salsa played a great set but selling the tickets was very difficult for this less-known band.  Profit was marginal and the cost of hiring the Town Hall made us nervous.  Who would pay if we made a loss?

We decided to minimise our costs by staging the event in the newly-cobbled Hitchin Market Place from the back of a lorry trailer.  This enabled us to run most of the day with a full programme of mostly local bands and also attract Market stalls and other activities: the beginning of ROTW as it is today.  Money was raised by a big street collection for Oxfam.  This was supposed to be an easier option, but we were taken aback by the amount of organising involved in this apparently simple event.  Topping the bill was to be Prince Nana Amponsah III from Ghana – a fourteen piece traditional drumming and dance troupe who would have blown the Town away if they had turned up.  In the event The Promised Land drew the crowds, played an explosive set and provided the impetus to carry on.

The rain years.  It's a mystery how ROTW survived these wet years.  1997 was so bad we decided just on the Friday, the day before, to move the entire event into the then vacant Corn Exchange with a makeshift stage and power from Brookers.  Such cavalier action is mind-boggling in these days of public liability and risk assessment.  The audience didn't seem to know where ROTW had gone until the evening when the Corn Exchange (and the makeshift stage) rocked to the headlong Soukous rhythms of Santana Mongoley and band from Zaire.

The Oxfam campaigns group had had enough.  The event wasn't making much money for Oxfam and rain had dampened spirits beyond redemption.  However, a small group of enthusiastic followers and a couple from the original Oxfam organisers decided to carry on.  New expertise and fresh enthusiasm moved the event on.  Workshops in the Town Hall, a stage in the Corn Exchange and the George pub accompanied the Market Place stage.  This (for the first time) was purpose-built, although the makeshift scaffolding and polythene structure would have presented no obstacle to rain if it had fallen.  In the event, the sun shone for the first time since ROTW had been outside.  African drummers Aklowa and Horace X drew unprecedented crowds and ROTW became a festival.  The media took notice and most importantly it drew the attention of music business professionals in the Town.

ROTW bounds into the limelight.  A new professional approach, closure of the High Street, more top quality performances, five stages with a greater variety of acts, a spectacular stage structure in the Market Place with professional lighting and sound and more market stalls.
In 2000 Kiki Dee, the only household name ever to appear at ROTW, attracted a big audience who stayed to watch stunning performances by the Dhol Foundation and Bollywood Brass Band. These competed with Yat Kha in the Town Hall playing to a capacity crowd.  ROTW had arrived!

“A great festival, thank you.  My entire family, including a 2 year old loved it.  I had to buy the CD of Yat-Kha for the 5 year old to play to his grandmother.”


Extended to Saturday and Sunday, ROTW 2001 was a true community festival.  People of all ages, races and backgrounds united in enjoyment of a single event.  A crazily eclectic programme of world-class music from Siberia, Africa, South America, Tibet, India and Hitchin including Ayub Ogada, Motimba, Ifang Bondi and Yat-Kha, it was a musical journey of contrasts and connections, inspiration, discovery and full-on entertainment for all the family.  With five stages, a Reggae sound system, dancing in the streets, carnival procession and four participating pubs, the festival was a unique community experience.  Without staging any widely-known names it attracted huge crowds on both days.  ROTW has become the big name.

what is it? history in pictures location the team